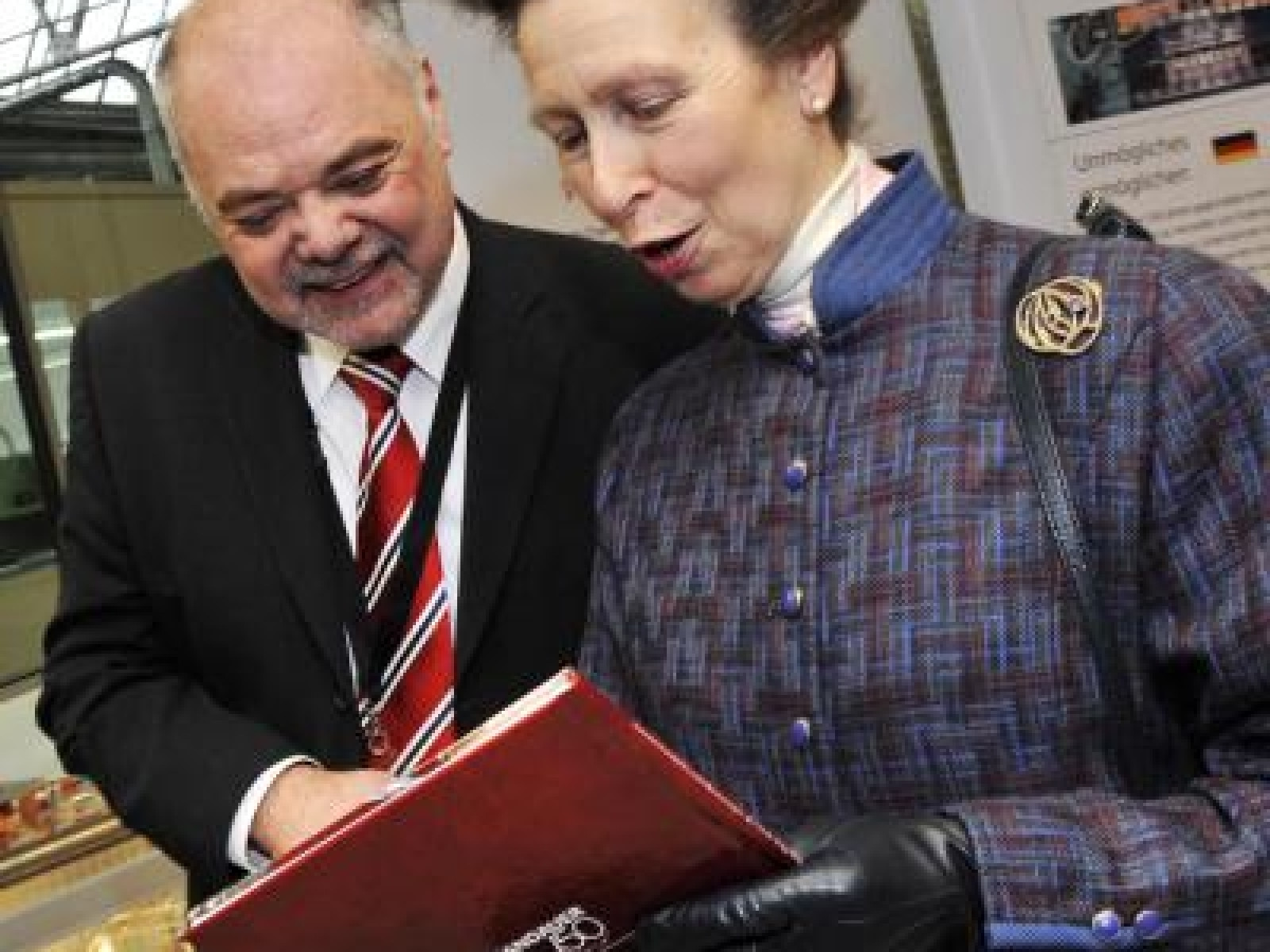 One of Birmingham’s longest established family-owned engineering companies was given a royal seal of approval yesterday as part of its 150th anniversary celebrations.

Brandauer, which started life as one of the City’s most respected pen nib manufacturers, welcomed The Princess Royal to its Newtown factory to showcase the precision components and stampings it currently sells all over the world.

Her Royal Highness Princess Anne was introduced to 11 former employees, existing staff that have more than 550 years service between them, recently qualified apprentices and the family owners, which included the co-founder’s four great-great-grandchildren.

She then viewed an exhibition of the many different Brandauer products from the past century and a half, including a tiny lithographic nib that has been in continuous production for at least 145 years, before viewing first-hand the state-of-the-art wire EDM cell, tool-room and upper press shop that is currently making vision system electrodes for a global automotive client.

John Berkeley OBE, Chairman of Brandauer, picked up the story:

“Back in 1887, our co-founder Joseph Letière Petit produced a pen bearing the Royal Coat of Arms to mark Queen Victoria’s Golden Jubilee, so it is a great honour for us to welcome a member of the Royal family here to celebrate our own important milestone.

“Before companies like Brandauer were established, people were writing with birds’ feathers sharpened to a point. The introduction of the steel pen revolutionised writing habits and today we are still at the forefront of innovation, supplying critical components to clean energy generation units and to ground-breaking projects, such as the Large Hadron Collider that will help transform our understanding of the Universe.”

He continued: “The Princess Royal was especially keen to learn about our commitment to training and our desire to use the 150th anniversary to inspire young people, promoting engineering skills and opportunities for the future.

“People have always been the bedrock of our business. Our longest serving employee ever was Mrs Fanny Phillips, who retired in 1961 after 71 years’ service. Today, all of our workforce, both young and old, share the same commitment to innovation and manufacturing excellence.”

Heading for a record £9m annual sales this year, Brandauer currently exports 75% of its sales overseas to more than 20 countries, including millions of components to the United States and China.

The factory tour, which was led by former apprentice and now Managing Director David Spears, featured an in-depth look at a recent international contract win with a tier 1 automotive supplier.

Estimated to be worth £700,000 per year, the order involves the production of specialist components for use in rear view mirrors on premium cars including Audi, BMW, VW and Porsche.

It utilises Brandauer’s ability to design, develop and manufacture the tool, then manage the specialist in-house stamping and heat-treatment processes needed to create an electrode clip form on a continuous metallic strip.
From here, it is then assembled by the Tier 1 customer to the mirror and the finished component carries the electrical current required to darken the glass, thus reducing the effect of dazzle from car lights and improving driver comfort.
Currently shipped direct to the US, the part will eventually find itself in hundreds of thousands of cars in more than 20 countries
Network
Brandauer – one of ten companies that make up MAN (Midlands Assembly Network) - produces in excess of 4 million parts every week for customers in the automotive, aerospace, electronics, medical and alternative energy sectors.

It offers the complete range of services required for the supply of pressed metal components, from prototyping, design and in-house tool production (or a specialist tool transfer service) through to high-quality manufacturing of difficult materials and global logistics.

In addition to the Royal visit, the company is marking its 150th anniversary with new branding, a micro-website and a host of high profile events, including a visit from Lord Digby Jones.

There has also been a book - ‘From Pens to Particle Physics’ – written that charts the historical story of Brandauer, with a special edition given to Her Royal Highness to mark her visit.

This will be used in schools, colleges, universities and elsewhere to help raise awareness of manufacturing in Birmingham and can also be downloaded from the company website.